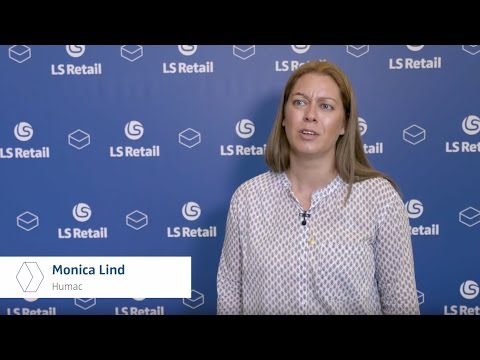 With 22 stores across Denmark plus an online store, Humac is one of the largest chains of stores selling Apple products in the country. On top of being the only Apple Premium Reseller (APR) in Denmark, the company also sells phone accessories, software licenses and services both to businesses and private customers. As an Apple Premium Reseller, Humac must follow a very strict set of rules. Apple Stores across the world are very recognizable because they all conform to a long list of detailed prescriptions – from the color on the walls, right down to the inches of distance between two Macs on display. Customer service is of utmost importance: the sales people working in Humac stores, like all Apple staff, are trained and recertified every 6 months. “Nothing is a coincidence when you walk into a Humac store,” says Monica Lind, CIO at Humac.

Looking for a top-of-the-line system

In 2014, Humac acquired a former competitor and consequently went through great expansion. It quickly became clear that the POS and management system they were using were heavily inadequate for the company’s needs. At the time, the company was running on a version of Navision that was almost ten years old; on top of that, all 22 stores were running on a demo POS system. The company could not manage online offers, not even as simple as mix & match. Although they were offering click & collect, they had limited control over the various phases of the process. Data is key to a successful business. At the time, the data Humac could extract from the system was unclear and useless for business purposes. Aside from revenue, they were unable to interpret and analyze any of it. The company decided that their first-class stores needed an equally excellent management system. Humac started searching for alternatives, keeping in mind that the new system would need to live up to the levels of speed and precision that Apple requires from its resellers. While working with one of LS Retail’s partners in Denmark, Humac came across LS Nav. The system had an excellent reputation and ticked many of the boxes: a complete solution with all the modules Humac required, including back office and financials. Humac understood that the new system would open many new opportunities, and chose it as its new solution.

Humac was advised to launch one channel at a time, and to factor in four to six months of preparation before doing the implementation - plus a couple of months for testing. The company however had clear ideas: they could not afford to spend six months on the implementation, and they didn’t want to run on two different ERPs at the same time. The company decided that they would do an overnight system switch, and set up a list of clear, if ambitious, requirements:

This meant doing a complete rollout and go live across 22 stores within three months.

Monica Lind recounts that this was a time of difficult decisions and intensive work. Great cooperation and the ability to prioritize helped transform a tough time into a great success for the company. Humac started by prioritizing business processes. Processes critical to day-to-day business were set as must-have, and would be part of the package from day one. After analyzing their critical requirements, Humac decided to implement the standard version of LS Nav. “Companies are often tempted to add customizations, but on top of being time-consuming and costly, they can cause complexities in the long run”, says Monica Lind. “Standard versions also have the great plus of being tested.” The standard version of LS Nav was found to cover all of Humac’s key business needs, removing the need for customizations. The weekend before the switch, the implementation team held the first and only system introductory session to over 200 salespeople from the company. “LS Nav is so intuitive that one session was all we needed,” says Monica Lind.

After eight weeks of intensive work, LS Nav went live in all Humac channels overnight. The 22 shops closed at 20:00 on September 30 with the old system, and reopened the next morning with LS Nav. All business processes were supported from day one, and the stores didn’t lose a single day of sales. The webshop was offline for a couple of hours around midnight; after that, it was business as usual for Humac. Two weeks after the switch, Apple released the iPhone 6. There were queues in front of the Humac stores, and Danish Apple fans streamed in to get the new item. LS Nav passed this tough test: neither the purchasing department nor the sales were impacted by the new system.

Despite the hard work and long nights, the team was very satisfied with the success of the implementation, and the fast improvements LS Nav brought to the electronics store chain.

The company now has better channel integration.  When customers use the Click & Collect service, Humac has control over all the phases of the sale.

Stock management around a product launch is complex at Humac. Items are shipped directly from Apple to the Humac stores and not, as is usual, through their warehouse. Serial number tracking must be enabled for security reasons, and without involving the warehouse that can be difficult. LS Nav has simplified stock management considerably. Now staff members can quick-scan the products when they arrive in-store. As items are scanned, the system automatically creates purchase orders (for example using the IMEI or serial number), creating a fast track and simplifying receiving and sales.

After implementing LS Nav, Humac strengthened the system by adding LS Recommend, LS Retail’s recommendation service. The goal of the implementation was to increase revenue on the non-Apple branded products the company sells, which are mainly accessories. When a prime product, such as an iPhone, is sold, staff members need to make sure that the customer also has all the accessories he or she might need. Employees are well trained to advise extra items such as screen protectors and phone covers. The company however stocks many more accessories, such as battery packs, hands-free headsets and speakers, which the customer might need, and which employees may forget to mention. In order to increase basket size, and decrease the likelihood that customers have to return to the store to buy an item they forgot, Humac implemented LS Recommend. LS Recommend analyzes shopping behavior, and uses the insights to deliver meaningful product suggestions to the stationary and mobile POS. Staff members can then relay these recommendations to customers. The system is set up so that it suggests only relevant products (based on actual data) that are not already in the customer’s basket. “The system provides great value for the company, by increasing the basket size, and also for the customer, who will get out of the store with everything he actually needs,” says Monica Lind. LS Recommend was initially implemented in two Humac stores. In the first three months of use, the company experienced a 46% total margin growth due to recommended items sales where LS Recommend was used. After seeing the great ROI (return on investment), Humac decided to expand the use of the product to all its 22 stores.

During an implementation, it is key to find a partner that trusts you and you trust, who doesn’t need to discuss every small detail and who respects the way your company is run. We found that, and more, in LS Retail.

Let the standard solution be the guideline. It is always better to adapt human behavior than mistreating a system to support your old habits.

We had expectations on how much the system might have improved our sales, but when we saw the metrics, we were taken aback – LS Recommend has grown our margins and basket size much more than we expected.

LS Recommend has improved the quality of our customer service and increased our revenue on third-party products.